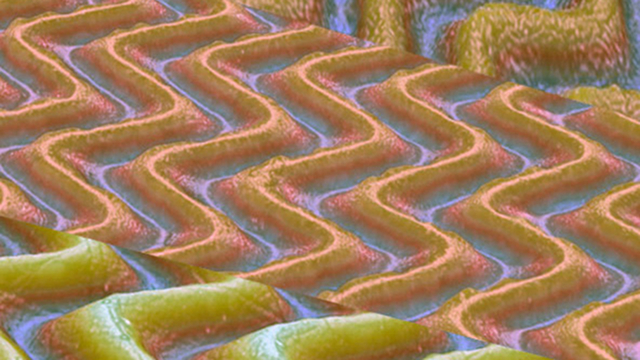 Images taken with a 3-D microscope show wrinkled surfaces produced using a method developed by the MIT team. The size, spacing and angles of the wrinkles vary depending on how much the original underlying surface was stretched, and how the stretching was released. Jorge Luis Yague and Felice Frankel

The project started as a way to design “anti-fouling” materials—surfaces that would inhibit the formation of bacterial biofilms, known as “biofouling.” It’s well known that surfaces with “topology”—such as the tooth-like projections on sharkskin—can prevent biofouling, explained Mary Boyce, head of the mechanical engineering department at MIT, who led the research. But rather than simply etch patterns into a surface, Boyce and her colleagues wanted a material that automatically carried this anti-fouling characteristic.

Enter the raisin. Raisins are wrinkled because the outer skin cannot shrink enough to accommodate its newly down-sized center, which contracts as a result of evaporative water loss. Boyce and her postdoc Jie Yin used two layers of differing elastic properties to get a similar effect.

First, a supple polydimethylsiloxane (PDMS) layer is stretched, then covered with a thin film of a stiffer polymer. When the tension in the PDMS is released, it shrinks, but the upper polymer layer cannot, so it wrinkles instead, explained Yin in an email. By releasing tension first in one direction, then in a second direction, rather than all at once, Yin forms wrinkles in a neat zigzag pattern.

What’s New: This zigzag pattern is the key, explained Michelle Khine, a professor of biomedical engineering at University of California, Irvine, who was not involved in the research. “This group has figured out how to make well-ordered wrinkles through an elegant and very simple approach,” said Khine. “This is a big deal because wrinkles are typically not well controlled… It’s easier to do stuff with things that are ordered and predictable.”

Importance: The study may have begun with a specific goal—prevent biofouling—but it turns out Boyce and Yin’s patterned microwrinkles have many potential applications. Using anti-fouling materials in implantable medical devices like stents and catheters can help prevent infection in hospitalized patients. Other possibilities include photovoltaic devices, which are designed to capture energy from sunlight. Different patterns of wrinkles could transmit and reflect light differently, making the technology more efficient. Boyce also predicts that similar wrinkles may be used to enhance LED technology by surrounding the diode with a reflective surface to give a brighter output. Furthermore, texture can be used to control whether a surface repels water, like bird feathers, an application in demand for water-resistant fabrics.

Needs Improvement: The method still needs tweaking to optimize it for different applications, but Boyce and Yin are optimistic. Changing the type of polymer used in the upper layer, in addition to its thickness and the tension used, can help alter the angle of zigzagging, the height of the wrinkles, and the space between them, and even shrink them from micro-scale to nano-scale, said Yin.

Khine, who would like to see strategies for patterns other than the basic zigzag, said it will be “interesting to see how far this approach can go.”