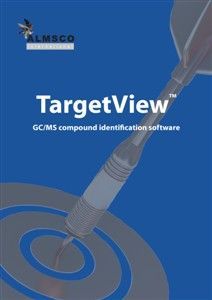 ALMSCO International has announced the launch of its new version of TargetView™, a software package for compound identification following GC/MS analysis.
Capable of detecting and identifying both target and ‘unknown’ compounds in complex GC/MS chromatograms, for either trace-level work or for routine screening, the software has been designed for all GC/MS analysts irrespective of the field of work.

TargetView delivers rapid screening of chromatograms against compound libraries, and provides the analyst with the capability to quickly and easily create bespoke spectral libraries. In addition to this, a new batch-processing option now allows multiple files to be screened against a single library, saving a considerable amount of time for the analyst.

Offering reliable results, the software has the capacity to detect trace-level analytes in complex chromatograms by eliminating GC background interferences. A powerful deconvolution algorithm allows the software to clearly distinguish between co-eluting compounds, even when the peaks have identical retention times.

Designed to be easy to learn and straight-forward to operate, ALMSCO is confident that TargetView offers the functionality you would expect from a high-end GC/MS data-analysis package. Commenting on this Steve Davies, Product Manager at ALMSCO International, said: “The advanced algorithms used by TargetView work ‘behind the scenes’. You don’t need to understand the detail of how it operates, or be an expert in chemometrics, to get accurate, reliable results.”

“It allows you to delve into the results as much as you want – from a simple ‘yes/no’ confirmation that a particular compound is present, to detailed examination of elution profiles, comparison of mass spectra, and viewing of extracted-ion chromatograms,” he added.

The software’s unique interface allows the analyst to generate reports that can be exported to a range of platforms, including MS Excel, as is compatible with common GC/MS files produced by all major brands of GC/MS instruments.

To mark the launch of this new TargetView, a free 60-day trial can be downloaded from the company’s website (www.almsco.com). A new video which provides an introduction to the software can also viewed on the ALMSCO website.