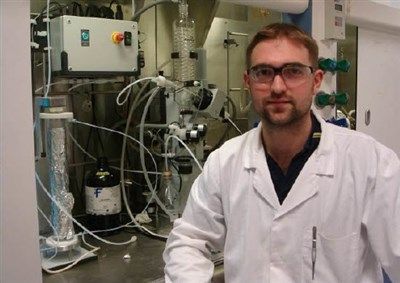 The new Heidolph Distimatic module has made large volume, solvent evaporation easy for the School of Chemistry at the University of Bristol. The Distimatic significantly enhances the working capacity of a standard sized rotary evaporator, enabling continuous automated distillation.

Dr. Luke Elliott and Professor Kevin Booker-Milburn from the School of Chemistry have invested in the Distimatic system to assist with the scale-up of photochemical reactions, a process that requires relatively dilute conditions. They reported “... we found solvent evaporation was becoming a major bottle-neck to further scale-up within the confines of a conventional lab fume-cupboard.

Simply attending to the basic processes of evaporation, refilling and emptying flasks, required a surprising amount of time. All this time is saved by the Distimatic, since it fully takes over after pressing a few buttons. This allows more time to be spent focussing on the chemistry.”

They also noticed an unexpected benefit, which was the ease with which the solvent could now be recycled. “After several hours, not only is there an evaporation flask full of concentrated reaction product but there is also a ‘waste’ bottle filled with 5 litres of clean solvent which we can now re-use for the next reaction. As a result we have already saved hundreds of pounds worth of solvent.

Considering the most commonly used solvent for photochemistry is acetonitrile, the Distimatic has also helped to reduce the impact our work has on the environment.”