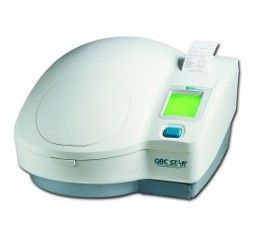 The QBC STAR™ Centrifugal Hematology System is the gold standard for performing CBC testing in a variety of...

The QBC STAR™ Centrifugal Hematology System is the gold standard for performing CBC testing in a variety of settings, including office labs and even remote locations. The QBC STAR employs innovative dry hematology technology, meaning that all of the reagents needed to perform a CBC test with the QBC STAR System are contained in the QBC STAR Tube. After filling the tube with the blood sample, the clinician simply places it in the specially designed QBC STAR System and obtains the test results after the analysis is complete. This unique approach provides multiple benefits for in-office CBC testing:

Eliminating Liquid Reagents  Because the reagents needed for the STAR are contained within a single tube, there is no need for the liquid reagents associated with conventional CBC analyzers. This means no boxes of bulky reagents that take up needed lab space. Using the STAR's dry system also means that there is no need to dispose of dangerous biohazard reagent chemicals, making the STAR easier to use and more environmentally friendly than other analyzers on the market.

Size and Portability  The QBC STAR Centrifugal Hematology System is extremely compact, measuring a small 16" x 16" for the entire self-contained unit. Because its reagent technology is contained within a single tube, the STAR is remarkably portable, and effective in many different testing environments. Installation time is less than 30 seconds, meaning the STAR is ready for use wherever and whenever needed.

Easy to Use  Unlike other hematology systems, the QBC STAR System is fully automated and so easy to operate that with minimal training, non-technical personnel can operate it. The operator simply inserts a STAR Tube into the machine, presses the START button, and walks away while the system performs a fully automated CBC analysis.

Reliability  Also noteworthy is the QBC STAR's exceptional reliability. Based on operational and failure data from clinical trials with both in-house and field instruments, the QBC STAR has been projected to have a three-year Mean Time Between Failure (MTBF) rate.