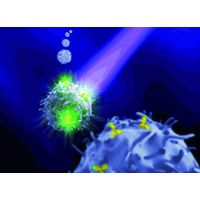 The Viobility™ Fixable Dyes allow the discrimination between live and apoptotic or dead cells by flow cytometry....

The Viobility™ Fixable Dyes allow the discrimination between live and apoptotic or dead cells by flow cytometry. The dyes are suitable for both fixed and unfixed cells.

There are no current Discussions

There are no Documents or Manuals available.

The Viobility™ Fixable Dyes have been developed for the detection and discrimination of dead cells. These dyes react with the primary amine groups of proteins which can be found on the cell surface as well as intracellularly.

In contrast to viable cells, dead cells exhibit a compromised cell membrane allowing the Viobility Fixable Dyes to enter the cell and stain proteins within the cell. This results in a up to 50-fold brighter fluorescent staining and thus allows the discrimination between dead and viable cells by using a flow cytometer.

There are no General Specifications available.