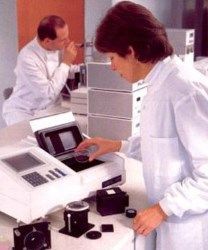 Universal Reflectance Measurements    The ReflectaScan Reflectance Spectrophotometer is designed as ...

The ReflectaScan Reflectance Spectrophotometer is designed as a universal reflectance measuring instrument capable of scanning samples over the wavelength range 190-1000nm. An integral printer plots results and an external dot matrix or colour inkjet printer may be used if required.

The integrating sphere system allows a range of measurements to be made.

There are no current Discussions

Diffuse Reflectance    A dedicated high performance SpectralonTM integrating sphere is used for diffuse reflectance and diffuse transmittance measurements. The sphere unit has its own silicon diode detector which uses a separate signal channel within the Spectrophotometer.

Turbid or Scattering Samples    The sphere unit is equipped with a 10mm pathlength cuvette holder so that transmittance measurements may be made for both turbid or normal samples. Scattering films may also be accommodated for measurement.

Coated Lens Reflectance    The optical performance of the anti-reflection coatings on opthalmic lenses is specifically catered for by the specular reflectance unit. A conical rest is provided to accommodate lenses up to 80mm diameter. Measurements are made with reference to an uncoated lens and the system is excellent for the production control of vacuum coated lenses. Many of these systems are now in everyday use.

Opthalmic Lens Transmission    The transmission characteristics of tinted opthalmic lenses may readily be measured using the CE 3077 lens mounting system. This allows the lens to be accurately centred on a carrier plate which is kinematically mounted on the body of the lens holder.

Measurement of Thin Films    Using the CE 3075 specular reflectance unit, the thickness of films deposited on a surface, for instance a epitaxial film of silicon dioxide on a silicon wafer, is readily measured.

Film thickness is calculated from an equation relating the number of peaks to their wavelength separation. Films down to about 0.1 microns in thickness may be measured.

There are no General Specifications available.